Sprinting & Other Types of Movement

On the weekend a group us met up for our ‘Non Running 1/2 Marathon Training Program’. And in case you haven’t been following this before this is a training program where we don’t do any running over 1/2 a mile in order to get ready for a 1/2 marathon.

This is the opposite of what 99.9% of people competing in this race will be doing.

But we’re not just going to complete the race. We’re going there to compete in it.

And this is one of the big differences of this program compared to other marathon training programs.

We are actually running and sprinting.

I mean no disrespect to those who are using the traditional approach for a 1/2 marathon or any other endurance race.

But the fact remains that there are 4 different ways we  can move. But using the tradional approach to training for a 1/2 marathon uses primarily one type of movement and often times completely excludes 2 of the others.

Before we go on I should probably identify what these four ways to move are and what distinguishes them. Let’s look at all four with respect to speed, ground contact, force into the ground, biomechanics, stride length and stride rate. 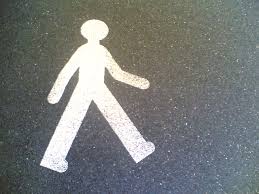 In terms of force into the ground, walking generates between 2-3 times bodyweight, with the heel contacting the ground first. There is minimal separation of the hips, a smaller stride length and stride rate. 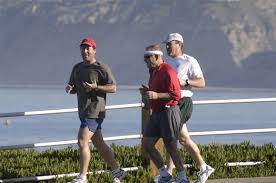 This would be the next fastest form of motion after walking and has a little less ground contact time than walking. Depending on the individual style, jogging usually has one foot off the ground and a small phase where both feet are off the ground. There are some however who shuffle along and have points in the movement where both feet are in contact in the ground and therefore are actually walking rather than jogging.

The force into the ground may vary from 4 to 10 times bodyweight and usually still involves a heel first striking motion. Over the years coaching clinics were fond of instructing with a ‘heel-toe’ cueing pattern.

Besides the heel-toe movement pattern, there is minimal hip separation though greater when compared to walking. Stride rate and stride length would be slightly greater than walking as well.

Running is a faster still than the 2 previous movements described. Ground contact time would be less than jogging and the force into the ground would be greater than jogging.

With running the biomechanics are unique. Now instead of landing on the heel and rolling through to the toe the action involves landing on the mid to forefoot part of the sole.

Imagine running barefoot on a parking lot that had wet paint on it.

Where would your foot contact the ground? Where would the paint be on the bottom of your foot?

Not on the heel.

As well the body has more of a forward lean to it and the arm action is more forceful and generated from the shoulders, not the elbows as is common with many joggers.

Stride length and stride rate, at about 180 strides/min, are both increased with running. 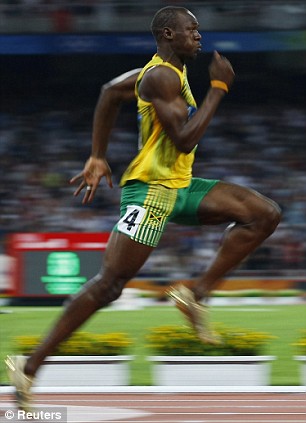 This one should be easy to visualize. Picture the 100 m finals at the Olympics. Imagine being chased by a grizzly bear.

Obviously your speed is the greatest and your ground contact time is the least. You also generate the greatest force into the ground. Stride length and rate will be the greatest.

When you consider the biomechanics the ground contact is on the ball of the foot and not on the toes. Hip separation is greatest. Maintaining a short lever with a bent elbow allows for a quicker arm action and consequently assists in a quicker leg turnover as well.

World class sprinters will reach speed of 10.44 m/s and cover over 2 metres on every stride.

The biggest difference between sprinting and the other types of movement is stride length. When we sprint we cover more ground distance and therefore take fewer steps. Avoid the tendancy to overstride and disrupt natural mechanics. Instead look to increase lower body strength through resistance training to be able to produce more force into the ground on each stride. As well ensure you are following a quality program that puts an emphasis on hip mobility and particularly hip separation.